The view behind Howard Sacks’ farm. 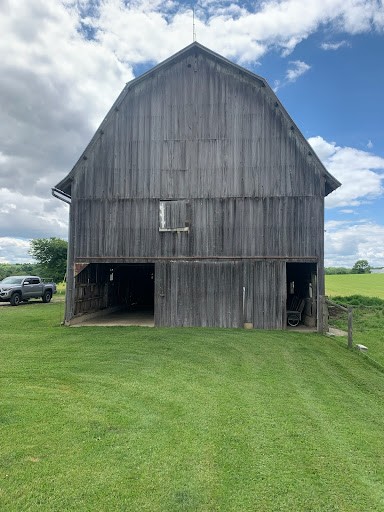 The entrance behind Howard Sacks’ farm.

“I always get really excited when I see the first swallow back, and I text Iris and I say, ‘They’re back!’” Chrissie Laymon ’01, a Knox County native, told me with a grin on her face. Before letting Assistant Professor of Biology and Environmental Studies Iris Levin use her farmland for research, Laymon could have never anticipated the joy she would get from seeing barn swallows. Similarly, as someone who grew up in the Connecticut suburbs, I was never fully exposed to wildlife (outside of the occasional coyote) — let alone barn swallows’ importance in nature. But earlier this summer, I spent one morning capturing about 30 barn swallows with Levin and three of her student researchers.

It was a noticeably cool 62 degrees outside. Levin’s lab group journeyed forth into the rolling hills of Gambier, long tucked away from Kenyon, to set up nets in a barn. The landscape was a pastoral dream. The 10 acres of land surrounding the barn were indistinguishable from the natural area around it. Cows aimlessly roamed the pastures, the property’s creeks tempted local wildlife and a mountainous tree’s tilting branches reigned over the lime-green grass.

These 30 barn swallows are part of an active collection of over 100 swallows — from this barn alone — that Levin has been studying in Knox County since 2019. Serving as a model system for ecology, these barn swallows are a staple in modern biological research to understand different songbirds’ social behavior. Levin’s research involves capturing and recapturing barn swallows to track changes in their plumage and health over time. Once these swallows have been “banded” with a tag that has a unique color combination on their feet, Levin tracks their social interactions with other barn swallows. By observing these factors, Levin’s research attempts to understand barn swallows’ mating behavior (since swallows pick mates by their plumage) and “social network.”

As everyone ran around and clapped their hands to scare the birds into flying into the net, banded and identified them, and processed data on them, the owner of the barn was mowing the lawn. Business as usual. Though he loves chatting with Levin and always tries to persuade her student researchers to let him take a picture of them on his tractor, he was letting everyone do their thing.

But then I started wondering why he would let Levin study these birds on his property. When we read about scientific research, we usually don’t question a scientist’s methods and procedures. We also don’t always consider the intentions behind where and how a scientist conducts their experiments, even though it can have profound impacts on their findings. Maybe this is all because we subconsciously limit our understanding of scientific research to a laboratory, far removed from the rest of the world.

But what about field research? What happens when these experiments are supposed to take place in the real world? If a scientist wants to use privately-owned property, why do the owners of these sites let scientists use them? Perhaps more importantly, in a place like Kenyon that’s at once integrated in and separated from the rural areas surrounding it, what kind of relationship starts to develop between scientists like Levin and site owners like Laymon? On July 16, I attended Levin’s annual “end of fieldseason” party, a gathering for her students and the site owners. Everyone laughed as Levin announced superlatives like “handsomest bird” and “derpiest bird” for each of the sites. I saw all of the site owners lean in and engage as Levin’s students shared their preliminary research results. Levin happily served handmade gelato from one of the site owners. One of Levin’s students played kickball outside with one of the kids at the party. While I can’t speak for all relationships between scientists and the owners of private sites they use, I can attest that Kenyon models one of the ways it should be done. After talking to Laymon and Professor Emeritus of Sociology Howard Sacks, the owner of another site Levin uses, I understand that seeing the fruits of offering their farmland for Levin and her students to conduct research is fulfilling on a personal level — due in part to Kenyon’s Rural Life Initiative and its history.

Understanding the Rural Life Initiative’s unique nature, Laymon, who coordinates the program as a staff member in Kenyon’s Office for Community Partnerships, is adamant about the Initiative’s importance to the College’s relationship with the surrounding community in today’s fast-paced society.

“We’re definitely in a rural area. Ohio, as a state, is fairly rural; agriculture is still our biggest industry,” Laymon said. “I think it’s important, especially as we move into the future, for Kenyon students and our community to understand the issues and values and history of a rural place and our place in it and how we relate to one another.”

The Rural Life Initiative has been integral in shaping connections between students, faculty, and local residents as a result of supporting research projects like Levin’s.

For Sacks, letting Levin use his site has led to a mutually-beneficial relationship. Sacks and his wife, Judy, both Philadelphia natives, became immediately interested in Kenyon’s surrounding rural area and the life of the “backyard academic” when he first came to teach at Kenyon. The couple eventually decided to move outside of Gambier to live on and maintain a farm, something that was very out of their realm.

After learning different agricultural practices from the kindness of their more experienced neighbors, Howard and Judy Sacks became focused on restoring the ecological balance of the wetlands on their property. As a result of their efforts, the restored wetland has produced a domino effect of promoting the health of all the wild species that call the Sacks’ farmland home. Levin has noticed the Sacks’ dedication to restoring the ecological balance of their land. And according to Howard Sacks, letting Levin use his land has allowed him and his wife to understand the ecological stance of their farm. “She told us that we had the fattest nestlings in the county,” Sacks chuckled, “and she said that it was probably due to the fact that there was a very rich food supply on our farm because of the wetland.” He then proudly told me about the “fattest nestlings” superlative his site has now earned for two years in a row.

Sacks lit up when he was talking about the types of social interactions he gets to have with the students, which Sacks firmly believes are just as important as the actual research. Sacks explained, “Our dogs love the student researchers, and, interestingly, the students tell us that they love the dogs, too. So there’s this social dimension that seems kind of frivolous, but it’s not! It’s meaningful and it’s a nice part of the summer.”

As a former professor, Sacks is always delighted to hear Levin talking about what the students are learning and the hands-on experiences they get to have. Sometimes Levin has directly involved Sacks in her research as she would with her students. Sacks became animated as he told me about one of his most memorable experiences with Levin and her team as they were processing data on the barn swallows. “She’s holding one of the barn swallows and telling me what she’s doing and I watched her. And then she asked me if I wanted to hold a barn swallow, which I did, and my wife got to too, and it was a phenomenal experience!” He beamed, “Even for my wife and I — and we engage with farm life all the time — to actually stand there and hold a barn swallow and be able to look at it, be told about it and have that direct interaction was incredibly meaningful!”

Like Sacks, Laymon was looking to improve the biodiversity of her farm when Levin initially emailed her. As someone who was raised by a biologist and is passionate about different education initiatives, Laymon was naturally interested in working with Levin. Though she had grown up on a farm and thus had a lot of experience with farm life, she became immediately swept up by Levin’s interest in barn swallows too.

Although Laymon knew that she needed to learn about the role barn swallows play on her farm, she didn’t know much about them before working with Levin. She says, “I had been aware of them and seen them my entire life, so after talking with Iris, we learned some really interesting things…. It’s been really interesting to watch the methods that they use to track the birds, the blood sampling, and the banding.”

As a Kenyon alumna, Laymon relishes getting to know Levin’s students. Speaking about what she has learned from talking to students one-on-one, Levin explains, “It’s refreshing—they’re usually really engaged and interested in what they’re doing, and it’s nice to see that kind of fire in students still.” Laymon further supports Iris’ work and promotes the opportunities for personal growth it provides her students. She says, “Iris’ work is really great in that she’s not only looking at the data and what she needs, but she’s allowing students to have relationships with people in the county, and I think that’s really important.”

As Laymon described the Rural Life Initiative’s plans to form similar connections between the Kenyon community and the Knox County community on an institutional level, she expressed her wish that students and faculty knew about the Initiative’s accessibility as a resource and its long history with the College. Even so, she is excited at the prospect of the College investing in more projects that conduct research in rural areas and discover their applications to help the wider community. Most importantly, she hopes that the Rural Life Initiative will facilitate people’s journey to honor the rural spaces and the people outside of the Hill. “We’re not looking to tell people about their rural area,” said Laymon. “We’re looking at how we can help share this mutual story that we all have by living here.”

Sometimes it feels like that we as Kenyon students — largely coming from urban, cosmopolitan areas — are disconnected from life off the Hill in Knox County. However, Levin’s work connecting her student researchers and the site owners demonstrates the Rural Life Initiative’s immense potential. If the Rural Life Initiative successfully facilitated the connection between Levin’s lab group and the site owners, then it is more than possible for the Initiative to enable even more connections to form between Kenyon students and faculty across all departments and our Knox County neighbors. While connecting the works of the Rural Life Initiative's predecessor and Sacks’ leadership with the current Initiative’s future, Laymon lit up at the thought of unifying Kenyon with rural Knox County. She told me, “Historically there has always been a divide between the Hill and the County, but the Rural Life Initiative has always been a way in which we’ve been able to bridge that.” And what would be a more beautiful way to bridge this gap then by helping and learning from each other?

This story was written by Olivia Hynes ’24, a scholar in the Hoskins Frame Summer Science Writing program. Find out more about the program below: