Out of 396 students from across the nation selected this year for Goldwater Scholarships, considered the premier award for undergraduate research in mathematics & statistics, engineering and the natural sciences, three of those winners are Kenyon students: math major Katerina Tang ’21 from Ann Arbor, Michigan; and physics majors Ericka Florio ’22 from Seattle; and Ryn Grutkoski ’21 from Moose Lake, Minnesota.

The honor, intended for students who plan to continue their research in graduate school, provides each winner with up to $7,500 for tuition and other education-related expenses.

While Kenyon students consistently have been awarded Goldwater Scholarships in the past — after being nominated by the College through a rigorous screening process — this is the first time in recent years that three students have won in the same cycle. All three winners also have participated in Kenyon’s Clare Boothe Luce Undergraduate Research Scholar Program, which supports women majoring in chemistry, physics, mathematics and statistics.

“Having a yearlong research opportunity early [in an undergraduate career] makes a difference in people’s ability to write a good Goldwater proposal,” said Professor of Physics Paula Turner, who co-leads Kenyon’s Clare Boothe Luce initiative. “Being able to write well and articulate what your research is about and why it’s compelling is necessary, and Clare Boothe Luce has helped students build that.” 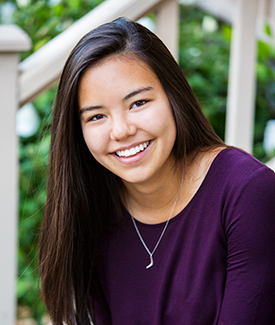 “I’m incredibly honored to be a Goldwater Scholar this year,” said Tang, who serves as vice president of Kenyon’s chapter of the Association for Women in Mathematics and is a member of the Environmental Campus Organization. Tang’s research involves the Erdős–Straus conjecture, an unsolved problem in number theory. “The Clare Boothe Luce program showed me how inspiring and rewarding it is to work on an unsolved problem, and I learned so much about creativity and persistence in the research process from my faculty mentor, [Associate Professor of Mathematics] Brian D. Jones. That experience made me feel capable of pursuing a research career — now, being selected as a Goldwater Scholar feels like a further vote of confidence.”

“I was really thrilled when Katerina was awarded the Goldwater,” Jones said. “She would be the last person to brag about an award, but she works so hard and she's very deserving. There are students who are extremely good at mathematics, but Katerina is good at everything.” Grutkoski, who serves as a community advisor and tour guide at Kenyon, works in the lab of Associate Professor of Physics Tom Giblin, conducting research into the expansion of the universe immediately after the Big Bang and the composition of dark energy. Grutkoski credits Giblin’s commitment to mentoring students while also giving them the power to forge their own paths and discover their own research interests. “He gives us a lot of freedom to choose our own projects,” they said. “Professor Giblin is going to provide all the guidance I need, but he’s also going to take a step back and let me take the lead.” Florio, who also works with Giblin, and who enjoys dancing, drawing and knitting when not in the physics lab, said that being part of the Goldwater community had connected her with fellow researchers she otherwise would not have met. “The Goldwater scholars have a workspace on Slack where we can meet to talk to each other and share information on topics like grad school, and all of the new scholars can write a small blurb about who they are and what research they do,” she said. “There are people working in so many fields, from astrophysics to green technology to meteorology. I’ve been awed at how accomplished they all are, and it’s still a bit surreal to think that I’m part of that community now.”

Grutkoski and Florio are “already starting to establish links to the greater particle physics and astrophysics worlds,” Giblin said. “They’re meaningfully involved in projects that address some of the major outstanding questions in cosmology and particle physics, and they’ve been able to make so much progress so quickly because they’ve found something that truly lights a fire inside of them.”

Congress established the Barry Goldwater Scholarship and Excellence in Education Program in 1988 upon the retirement of the five-term U.S. senator from Arizona and one-time Republican nominee for president.