In the face of injustice, even when it doesn’t necessarily directly impact you, what would you do?

For nearly a decade, Kenyon alumnus Marco Saavedra ’11 has led the fight for migrant rights and social justice in the United States, a testament to his bravery and action-oriented leadership. An undocumented immigrant himself who majored in sociology at Kenyon, Marco has called the U.S. his home since he was 3 years old. In 2012, Marco turned himself in to immigration authorities in Florida in order to infiltrate an Immigrations and Customs Enforcement detention center, with goals of supporting those detained and exposing their medical neglect by the center.

A year later, The Dream 9, which included Marco and eight other activists who would be allowed to stay in the country under the never-passed DREAM Act, self-deported to Mexico in solidarity with immigrants whose families were separated under the Obama administration. On their march back, the group wore their graduation caps and gowns — an unofficial symbol of the DREAMer movement — as Marco wore his Kenyon robes. Marco now faces deportation, which could mean danger, torture and/or death once in Mexico, due to his activism and political opinion. According to United States asylum law, Marco’s case merits asylum.

There’s something unique about the Kenyon family: you may not have overlapped during your time on the Hill, but the strong attachment a fellow student or alumnus has to the campus and to each other is a force to be reckoned with, a bond inseparable.

On Wednesday, Nov. 6, I, alongside 15 other Kenyon students, traveled to New York to support Marco, a hero and inspiration to many, in his final asylum hearing.

Scout Crowell ’20, Camilla Wise ’20 (photo above) and Paola Liendo ’20 were the student leaders behind organizing the Kenyon trip to New York City. We are also grateful that the Office of Diversity, Equity, and Inclusion; Adelante, Kenyon’s Latinx student association; and the Latino/a Studies Program not only provided moral and financial support but also helped strategize the logistics behind this trip. Additionally, Professor Emeritus of Religious Studies Royal Rhodes kindly financially supported our trip. With this assistance from faculty and staff, we were on our way to New York within a week of receiving the news of Marco’s hearing. 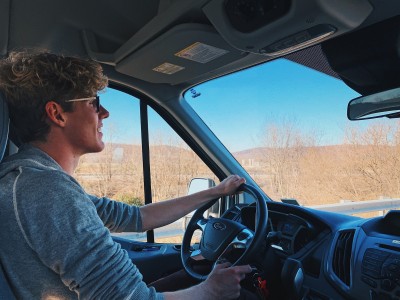 We departed from the Hill at 9 a.m. and headed to the city. After 10 hours of following a meticulously strategized driving plan, we arrived in New York City after dark. We split into three groups: one booked an Airbnb, the other borrowed a friend’s empty place, the third went home with a New Yorker on the trip. 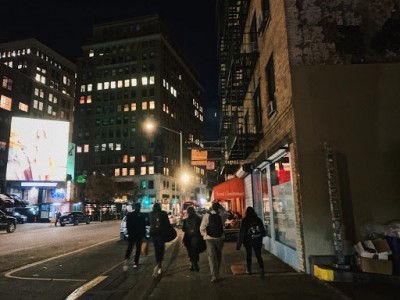 Promptly after arriving at our accommodations for the night, we found ourselves sitting together, preparing ourselves for the next day, listing out all possible outcomes. We hoped and prayed for the best one, that Marco would be granted asylum by the U.S. government, but we also prepared for the worst. Even knowing that violent rhetoric and policies against immigrants in the U.S. has further escalated in recent months, Marco has not ceased to advocate for migrant rights.

On Nov. 7, five alarms rang simultaneously at 6 a.m. Soon enough, we were back on our way. We marched to Federal Plaza, where we planned to meet the rest of the supporters for Marco’s hearing. 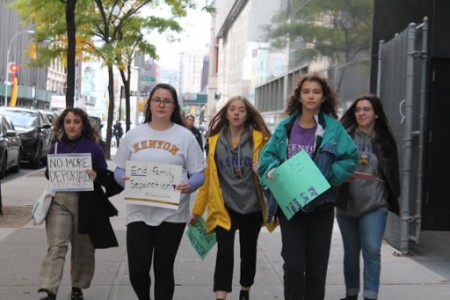 The powerful crowd of nearly 100 people was easy to spot. Indeed it received great media coverage and visibility. Signs in the air showed “Migration is a human right!”, “No deportation on stolen land!”, “Todos Somos Marco.” Also in the crowd was a Kenyon banner, proudly held high. There were many times when my eyes watered. “Hi, beautiful people,” said a fellow Kenyon grad — these words felt like home. We gathered and listened to Marco, his sister and other advocates speak. Subsequently, we marched around the back of the Federal Plaza Immigration Court, chanting “Estar con Marco es un honor” (“it is an honor to be with Marco”).

Truly, in that moment, it was an honor for all that were present. For the 16 of us, it could have been our proudest moment to be a Kenyon student.

We saw Marco walk inside the building. The courtroom could only seat 20 people. So while we had prepared to attend the hearing itself, we were also ready to protest outside — whatever we could do to demonstrate that Marco’s life, and those of thousands of others facing deportation, matter. Basic human rights and dignity matter. 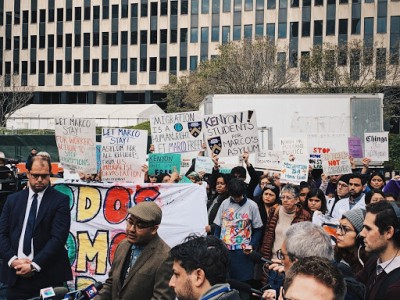 Nov. 7, 9 a.m. — Protesters gathered at Federal Plaza. Marco spoke to the press before entering the courtroom.

Migration and equality are intertwined at the heart of U.S. history. Agree with me or not, all Americans were immigrants, legally. The only ones whose ancestors were native to the land, on the other hand, are now the most marginalized and disenfranchised groups in this country.

We spent hours outside, under the leadership of Marco’s friends and family, pleading for protection in the country he has called home for 26 years. We chanted, we sang, we protested, in both Spanish and English. There, we also met Kenyon alumni — who were founding members of Kenyon Students for Justice in Palestine and ECO (Environmental Campus Organization), among other student affinity groups. Alumni brought food and drinks for fuel.

Throughout the day, we continuously received updates from inside the courtroom and chanted the loudest when Marco’s sister, Carolina, notified us that Marco had begun testifying. For years, the family’s Bronx restaurant, La Morada, has been a sanctuary for all. It seemed that, at the moment, the unity of all the people present at Federal Plaza were upholding the refuge that the Saavedras have never ceased to provide for the community.

Marco’s case was scheduled to conclude at 1 p.m., but at 3 p.m. we were still anxiously waiting, sitting on the steps outside the building. The Kenyon contingent had pushed our return schedule by two hours. Though we had absolutely hoped to be present when Marco walked out of the courthouse, we had to embrace our journey back to the Hill. As we were crossing through Pennsylvania, we received the news. Marco had temporarily avoided potential deportation and continues to fight for his asylum case. Here’s Marco’s quote about the outcome:

It’s an inconclusive result because of the amount of evidence that was submitted on my behalf. The attorneys on both sides will have until Jan. 17 to make closing arguments, at which point the judge will respond as soon as possible. … I think that today we presented the strongest arguments possible ... and it seems that the interrogation from the government attorney was very brief. So in the worst-case scenario, if this has to go to appeal, we believe that we’ve established a very strong case.

This is certainly not the end. We will continue our fight for Marco and for thousands of others facing deportation and family separation as well. As Kenyon students, alumni, friends and families, here is a list of things you can do to help: 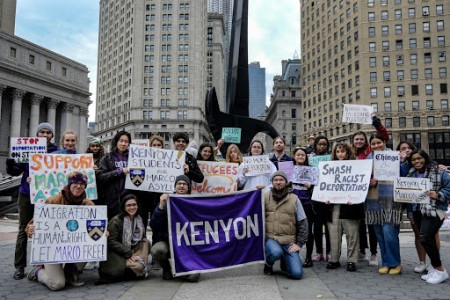 On our drive back, I remembered the words of Professor Van Holde (my faculty advisor, chair of the international studies department and lecturer of our senior seminar). One late Monday night, after three hours of discussions on the topic of borders, migration and human rights, he mentioned in class, “When I question why I entered academia, I am reminded that I am educating a group of inquisitive and agentic adults ready to solve big problems and take action.”

As we ride through the night in the van, the voices of the protestors ring in my head: “Home is here. Families belong together. Kenyon for Marco’s Asylum. Todos Somos Marco.”