The Social Impact of Real-World Research

A landmark survey by Assistant Professor of Sociology Austin Johnson sheds light on the experiences of young LGBTQ people growing up in the American South.

For Assistant Professor of Sociology Austin Johnson, research about the health and well-being of LGBTQ people in the American South can’t be confined to academic journals — it’s vitally important to share that research with the communities directly affected by the findings. That’s what Johnson has done following completion of a landmark survey of more than 4,000 LGBTQ Southerners. 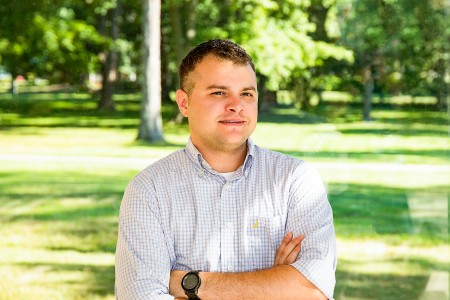 “My research is really focused on working with nonprofits to do community-based research that’s aimed at understanding contemporary social problems,” said Johnson, who serves as the director of research and policy at the Campaign for Southern Equality (CSE), an advocacy group based in North Carolina. The survey, “Coming of Age as an LGBTQ Southerner,” was supported by CSE and Campus Pride.

Chief among Johnson’s recent findings is that a majority of LGBTQ people who responded to the survey reported efforts by parents or caregivers to change or repress their identities, and that many young people do not feel fully supported by their families, churches, schools and healthcare providers. “Folks are feeling a lot of stigma; they’re feeling a lot of discrimination, harassment, lack of support and lack of resources,” Johnson said.

The online survey, which used social media and email targeting, as well as community organizations and ambassadors, to reach LGBTQ people in both rural and urban areas across 13 Southern states, suggests that respondents between the ages of 18 and 24 may actually feel less supported than their older peers — a seemingly paradoxical result of greater visibility and social acceptance of sexual and gender minorities in recent years, as perception and reality collide.

“We have pop culture saturated with LGBTQ life, and so [young people] are being told they live in this post-gay society,” Johnson said. “But I also think the young LGBTQ people are asking for more support, and they’re more likely to assume that they’re supported and to seek out resources. … The lack of support and inclusion is disempowering for them, and we are seeing real-time effects in terms of higher suicidality and higher rates of depression and anxiety.”

Johnson’s initial report of the survey findings garnered coverage from NBC News; a recent follow-up report issued shortly before this year’s midterm elections focused on civic engagement, political representation and voting behavior among LGBTQ Southerners. Despite feeling low levels of political efficacy — the ability to influence politics — survey participants reported higher levels of voting than the general population, and reported that legislation impacting the LGBTQ community made them more likely to vote in state and local elections.

Johnson noted that state legislatures across the nation and especially in the South have put an increased emphasis in recent years on legislation aimed at sexual and gender minorities, sometimes passing these bills into law. A lack of large-scale, high-quality research about the experiences of these communities means there’s less data available to present to legislators and other policymakers. Recently, Johnson received a grant from the University of California, Los Angeles School of Law Williams Institute — which conducts research on sexual orientation and gender identity law and public policy — to collect data on LGBTQ communities.

In the classroom, Johnson often teaches courses focusing on sociological aspects of health and sexuality, as well as social research methods. He has found Kenyon students to be eager participants in action-oriented coursework. “It’s not just about ‘how do you critically analyze this idea.’ Now that you know, what do you do with that information to solve a social problem?” Johnson said. “Students are motivated — they want to use the work.”

“Part of what drew me to sociology is the capacity the discipline has for helping people,” said Cynthia Oyarce ’23, a sociology major from Henderson, Nevada. “It seems logical to assume that studying society can easily translate into helping society, but the field hasn’t necessarily preoccupied itself with having a social impact. Professor Johnson’s preference for a more public sociology is evident in all of his teachings. He urges us to think beyond the academic ramifications of the discipline, reminding us that the social factors we’re committed to studying do, in fact, affect people.”