The Edge of the Mountain 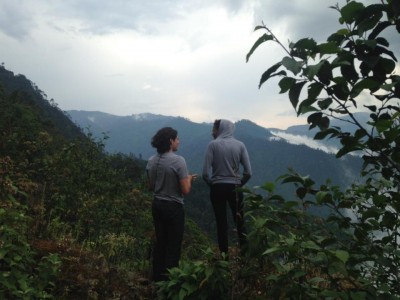 My first night in Oaxaca City, Mexico, the bells rang for me.

They rang in the Zócalo, a colonial relic of a gathering place, with paved stone expanses hemmed in by the balconies of restaurants, shops and apartment buildings. My friends and I arrived here under the night’s yellow lamplight and the twinkling of houses precariously perched in the nearby mountains. Oaxaca City sits at the edge of the Sierra Madre mountain range in Southern Mexico. It is a valley of a city. In the dark, we joined tourists celebrating Semana Santa, a Christian holiday that marks the week before Jesus’s resurrection.

Children tossed brightly colored, battery-powered toy orbs. Merchants peddled sweet treats and savory bites. Some people wandered the crowds, begging for money or food. And the bells rang, pealing through the streets to signal the start of tonight’s ceremonies in the Cathedral of Our Lady of the Assumption.

Our stay in Oaxaca was part of Earlham College’s Border Studies Program travel seminar. The U.S.-Mexico border is not just the United States, so we venture to other locales, like Oaxaca, to reckon with the massive puzzle pieces that are immigration. While we learned much from the organizations battling imperialism and emigration in Oaxaca, we left the city to learn more. Driving through the northeast range of mountains, we traveled to the mountaintop community of Santa María Yaviche. The journey there was a gut-wrenching ride of twisting and turning switchbacks. In our van, we seemed to reach the sky, rolling through white mist that we realized — only after — was actually clouds.

The dusty trees and colonial architecture of the city dropped away, revealing lush, almost jungle-like forests. Trees scrambling over one another to reach the sun. Water dripping down from exposed rock. Moss, lichen. At every pit stop, we peered over the edge of the mountain to scare ourselves at the precipitous drop.

Yaviche, a town of damp, red mud, the same material the traditional adobe houses are made of, peered back at us. The community was full of noise: roosters announcing themselves, people calling in the streets, the occasional donkey and, perhaps most remarkably, the metallic whistles and gurgling bursts of the local children’s wind ensemble band.

While the town seemed like it might slip off the mountainside at any time, like the sun might shine too brightly to see or the fog might settle down to render the roads impassable, Yaviche is truly a revolutionary community, embracing its indigenous Zapoteco identity. It has its own radio station, broadcasting in the town’s Zapoteco language. It has its own cellphone system operating at incredibly cheap prices. It refuses the involvement of the Mexican government and handles its affairs through traditional forms of governing. The town has developed its own programming systems using open-source software that allow its community members to use computers in their own language.

We spent only two days in Yaviche, but one moment that has settled into the filing cabinets of my mind was meeting community leader Gladís Martinez Flores. Gladís is calm, yet fearless, and bubbling with laughter. Her parents refused to let their daughter leave the community to pursue higher education, so she earned her degree (in community organizing) online. She has worked with pregnant women and young mothers, often marginalized and cloistered in their homes (by tradition and by social norms) to attend family educational programs. She ushered young women and girls into the community’s wind ensemble, breaking gender norms while recognizing the value and talent of the community’s women. The beautiful racket of the wind ensemble, heard throughout the mountain range, represents Gladís’s tireless commitment to the women of Yaviche. When nearby towns need a band for a celebration or event, they call on Gladís’s group.

Although I cannot speak for Gladís, her work as an unapologetic advocate for women’s rights — especially in the context of indigenous, rural and colonization-resistant communities — challenges what it means to be a woman in today’s society.

Last year in Professor Sylvie Coulibaly’s U.S. Women’s History course, we examined the work women do to challenge the norms, the status quo and the oppressive forces of patriarchy. Some women march, some create organizations, others write. One of those writers, sitting in another section of my mind’s filing cabinets, is Ida B. Wells, the anti-lynching activist. Her unapologetically, radically challenging editorials on lynching were so negatively received, she had to flee Memphis, Tennessee to pursue her investigative journalism elsewhere. She wrote fearlessly of the violence enacted against black people at the turn of the last century. She educated others and she resisted the racism and oppression of her era.

Her work, like Gladís’s in Yaviche, critiques the treatment of those who are marginalized. Both women expose the horrors of our own actions and ask us to do better. They offer solutions and build community around these solutions. They are the bells, like those in the Zócalo’s Cathedral, ringing in our ears, asking us to see, with clarity, the shortcomings of our society. And as my education both at Kenyon and in Earlham College’s Border Studies program has taught me, we can respond to these alarms with hope, compassion, empathy and, perhaps most importantly, the means to correcting those injustices.