Night Hiking Under the Beaver Moon

Forming close relationships is my favorite part about my work in environmental education—but how could I make those connections in the dark?

As I sat in the gravel parking lot by the river, I rubbed my hands together to keep warm in the cold night air. It was dark, but not pitch black, as the light of the full Beaver Moon overhead gave everything a faint, cool glow.

This wasn’t my first time leading a night hike, but it was going to be my first since starting my position as the Post-Baccalaureate Fellow at the Brown Family Environmental Center. I had led similar programs in the past for 10, maybe 15 people at a time. But this? “It’ll be closer to 50 people,” my boss Noelle, manager of the BFEC, said. “Since we invited both the public and the Kenyon Community, you can expect a huge turnout.”

Remembering her words, I sat there, stomach churning at the thought of managing a crowd that large in the dark, yet excited by the challenge. Soon, cars started pulling in, bringing in a wide range of people from Knox county. Clumps of Kenyon students began filing down the hill. Before I knew it, a small army of people had amassed.

Taking a deep breath, I stood up on a picnic table to get a good look at everyone there. Thanks to where I stood (and my astigmatism), I struggled to see anyone’s face. I’d grown used to smaller programs, where I got to know participants so intimately. Forming those close relationships is my favorite part about my work in environmental education—but how could I make those connections in the dark?

Putting my worry aside, I knew it was time to begin the night hike. I cleared my throat and welcomed everyone to the program as I had done a million times before. Suddenly a soft voice rose out of the silhouetted crowd.

I immediately recognized the speaker—it was one of the children from the local community who regularly attended my Family Nature Quest programs. He had recognized me and called out with an excitement that made my heart swell.

“Hello again! I’m so glad you’re here,” I responded, embracing his welcome interruption that felt, to me, like a light in the dark.

With renewed confidence, I finished going over some safety rules and discussing the Full Beaver Moon, named for the time of the year when Ohio’s native beavers prepared their dams and lodges for the cold winter ahead. I then reminded everyone that we would be embracing the dark as we hiked.

“We’ll have trouble seeing, but we’ll lean on our other senses: primarily, sound and touch,” I said. “For the sake of our safety, though, let’s not embrace taste on this hike.”

Quips like that in my introduction were meant to break the ice, and as I gave everyone the signal that we could begin walking, I was delighted by the happy chatter that emerged from the group. Despite the chilly autumn weather, we were warming up to one another.

As my eyes adjusted to the low light, I noticed more familiar faces emerging from the dark. Students I had known when I was at Kenyon made sure to say hello; a coworker told me he had been excited for this hike all week; and some older Knox county community members I spoke to turned out to be from my own hometown. I realized this was not just some amorphous blob of people. These were my friends, some new and some old, coming together as fellow moon-lovers brave enough to join me in the cold. 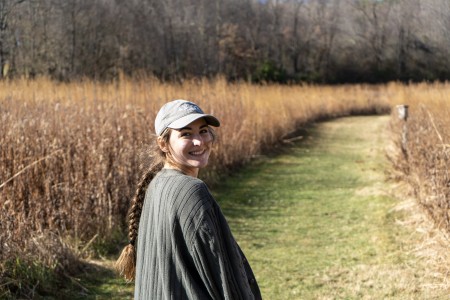 I was feeling much more comfortable by the time we arrived at the location of our first activity. I asked everyone to form a tight circle around me, facing outward with their hands behind their backs. Asking for their trust (and assuring them nothing was going to bite), I slowly walked around and gave everyone a chance to touch a “mystery object” I held in my hands. This activity is often just as entertaining as it is educational, which is exactly what it turned out to be as people blindly reacted to what they could only feel.

Some nervous squeals, giggles, and interesting guesses later (including, hilariously, “sequins”), I revealed to everyone the mystery object: a preserved beaver tail. This evoked loud gasps, sighs, and even more laughter from the crowd as they debated about who had made the closest guess. I couldn’t help but laugh, too.

After that, we continued our hike. Together, we watched the bright moon in awe as we walked around the prairie, cupped our hands around our ears to hear the rushing water of the Kokosing along the River Trail, and challenged ourselves to guess the colors of crayons using nothing but our night vision. The entire time, the same joyous energy from the first activity never seemed to fade. Cheery conversations and moments of wonder rippled through the group.

By the time we made our way back to the parking lot, I was shocked to find that I felt the same sense of camaraderie that I formed at smaller programs, despite the large group size. It was as if the dark had given us a chance to open up to one another in a way we couldn’t in the daylight. In doing so, the group embraced where the night (and their guide) took them, just as they embraced their other senses.

I pondered all this in the moonlit parking lot as people thanked me and began to leave. One of the last groups to leave was a family I recognized from several past programs who approached me to say goodbye. “We’ll see you at the hike next weekend, too!” they said cheerfully. “We can’t wait!”

I smiled. I couldn’t wait, either.

Emma Renee Coffman '22 is the Post-Baccalaureate Fellow at the Brown Family Environmental Center.