Lisa Schott ’80 will step down as managing director of the Philander Chase Conservancy after a long career serving Kenyon. 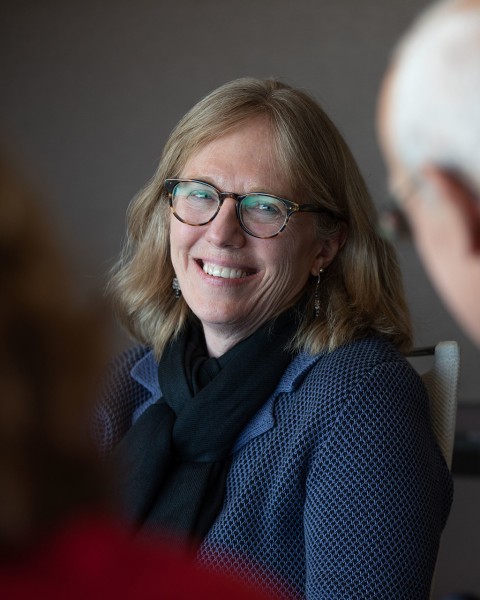 Every journey to Kenyon, characterized by the approach to Gambier Hill through unspoiled rural and agricultural landscapes, owes its signature natural beauty in no small part to Lisa Schott ’80, who since 2010 has served as managing director of the College’s land trust, the Philander Chase Conservancy (PCC). On June 30, 2022, Schott will step down from that position after a nearly 40-year career with Kenyon.

“Lisa has surely been one of Kenyon’s most fervent supporters for decades, not just as an employee of the College, but as a dedicated alumna,” said President Sean Decatur. “At PCC, she has nurtured productive relationships between the College and local farmers and landowners, built on a foundation of trust and mutual respect. I’ve been fortunate to have such a capable, caring and positive partner in the work of protecting this place we all love, and Gambier quite literally would not be the same without Lisa.”

After the area around Kenyon began facing development pressures in the 1980s, the College purchased land near its entrance and established the Brown Family Environmental Center (BFEC) nature preserve in 1995. Building on that effort, the Philander Chase Corporation was founded in 2000 with a mission to protect the natural beauty and ecosystems of the farms, woodlands, waters and open spaces surrounding Kenyon — extending the legacy of Bishop Philander Chase, who chose Gambier Hill as the site for his new college in large part due to its unspoiled rural beauty.

Under Schott’s direction, the conservancy has worked with farmers, landowners, environmental groups and government agencies to preserve the character of a five-mile radius surrounding Kenyon’s campus through conservation and agricultural easements. It was renamed the Philander Chase Conservancy in 2016, and remains the only conservancy created by a college or university in the United States. So far, PCC has protected more than 2,800 acres of agricultural land, 1,400 acres of woodland, 700 acres of pasture and 18 miles of rivers and streams. Schott was also instrumental in establishing the Kokosing Nature Preserve, a conservation burial ground on 23 acres on restored prairies that is the first green cemetery in the nation to be affiliated with a college or university land conservancy, as well as the Kenyon Farm.

The board of PCC has engaged Painter Executive Search, a recruitment firm with deep experience working with similar nonprofit organizations, to manage the nationwide search for a new managing director. A committee, chaired by PCC board member Wendy Webster P’18 and composed of additional board members and Kenyon faculty and staff, will evaluate candidates this spring.

Before Schott joined PCC in 2010, she spent 25 years in various roles in the College’s advancement division — overseeing annual funds, serving as a gift officer and using her enthusiasm for Kenyon and firsthand knowledge as an alumna to direct programming for Kenyon families and graduates returning for homecoming, reunion and other events. Schott was an anthropology major at Kenyon and earned a master of arts degree in history and museum studies at Case Western Reserve University, working at the university’s Dittrick Museum of Medical History before returning to Kenyon.

The land trust’s next general manager will be tasked with maintaining the good relationships Schott has forged with both current and potential future landowners, according to Zali Win ’84, chair of PCC’s board of directors. On top of that, they will focus on further integrating the conservancy with both the College’s academic programs and Kenyon’s other green centers, like the Office of Green Initiatives, Kokosing Nature Preserve, Kenyon Farm and BFEC.

“Lisa has been an amazing leader over the past decade,” Win said. “She’s been a delight to work with, and her extensive knowledge of the alumni network has really helped us expand our programs and increase the engagement of people who are interested in conservation in this part of Knox County. We wish her the best in her retirement, and hope that she continues to be involved.”