William F. Klein, longtime professor of English, was known for his delight in the history of the English language.

Born in Dwight, Illinois, on Nov. 21, 1936, Klein grew up in Indianapolis and briefly considered becoming a priest after high school. Instead, he entered hometown Butler University, where he earned his Bachelor of Arts, worked for a bit in the insurance industry, and then proceeded to the University of Chicago, where he received his master’s degree and doctorate.

Klein came to Kenyon in 1968 as an instructor of English. He won tenure and promotion to associate professor in 1976 and promotion to full professor in 2001. “Bill’s teaching dealt largely with the history of the English language,” remembered his friend and colleague P.F. Kluge ’64. “His interests led to presentations for 15 consecutive years at the International Congress of Medieval Studies.”

“I took ‘Heroic Literature’ and ‘Arthurian Literature’ with Bill Klein,” said Julie Miller Vick ’73, a longtime friend of Klein and his family. “His passion for the books and time period he taught was so infectious that we students became just as excited by it. Bill was a kind man who was always available for discussion during office hours, after class, while walking down Middle Path, or by phone to his home. He and his wife, Joyce, were friends to so many students and graduates.”

From 1979 to 1981, Klein served as an editor of the Kenyon Review, sharing the duties with fellow English professors Philip Church, Galbraith Crump and Robert Daniel. He later took on the responsibilities of associate editor, a post he held until the end of T.R. Hummer’s editorship of the Review in 1989.

Klein’s other interests at the College were wide ranging. He was twice the chair of Campus Senate, of which he was a longtime member. He also served as both member and chair of the Admissions, Faculty Development, and Faculty Lectureships committees, the Committee on Athletics, the Committee on Student Affairs and the Judicial Board. Perhaps the most thankless of all his roles, though, was his eight-year run as Faculty Marshal.

In 2016, Klein retired from the College and became a professor emeritus. He was awarded an honorary doctorate in humane letters at that year’s Commencement, with a citation written and presented by Kluge. “What I will remember most about Bill is how often I could find him in his office on the second floor of Sunset Cottage, grading papers, preparing lectures,” said Kluge. “We all do that. But often he sat there thinking, meditating, reposing in a place he loved. He didn’t just work in that office; he lived there.” Kluge included in his citation this reminiscence from a former student: “Some of my fondest Kenyon memories are of Friday afternoons in Bill’s office, drinking tea and translating old English, where I learned that serious scholarship need not arise out of seriousness of personality. Whether rapping the opening of the Canterbury Tales or arguing over the proper solution of the Anglo-Saxon riddles, Bill challenged his students to take delight in whatever they studied. The word I most associate with Bill is joy: joy in literature, in the whimsy of creation and in all life.”

“Bill was one of the first faculty members I met at Kenyon and one of my professors in my junior year,” recalls Tom Stamp ’73, College historian. “He became a cherished friend after I returned to Gambier as a Kenyon administrator in 1984. Bill was a regular attendee at our gatherings of Friends of Martinis, a convivial local group of which he was a founding member. He had a strong preference for Beefeater’s gin.”

Klein’s children remember him, as do many others, as a man who was always active until slowed down by age and infirmities — although they didn’t slow him down that much. In a Facebook post announcing their father’s death, they memorialized him as an “avid fisherman, notorious boatman, curious traveler, and persistent athlete, enjoying horseback riding with Joyce and friends, running marathons, and swimming with the Kenyon swim coach.” 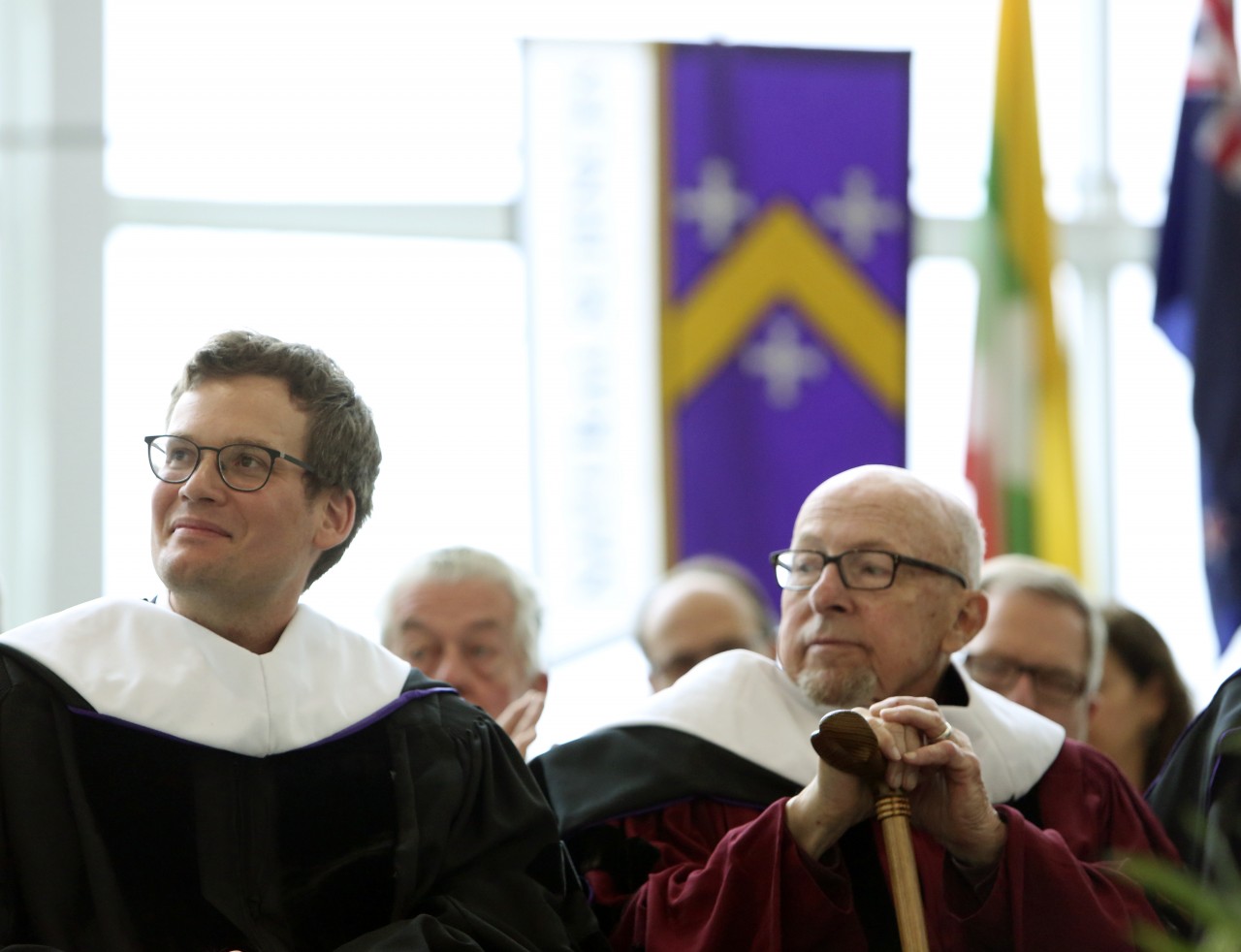 In 2016, Klein retired from the College and became a professor emeritus. He was awarded an honorary doctorate in humane letters at that year’s Commencement, where he was seated next to graduation speaker John Green ’00 H’16.

“Whether it was explaining in class that the Chinese character for ‘red’ included the depiction of the interior of the empress’s sleeve or demonstrating the best way to carve one of the hundreds of roast chickens I shared with his family, Bill was eager to impart his knowledge,” remembered Alice Cornwell Straus ’75, a former member of the College’s Advancement, Communications, and Enrollment divisions who is now retired from Kenyon. “He read voraciously, spoke loquaciously and embraced this former pupil unreservedly. His sense of whimsical humor was evident in such things as the ‘Carpe Canem’ sign on his front door or his impish grin beneath a paper crown at Christmas dinner, but he was also profoundly serious about delving into solutions of ancient riddles or into the mysterious ways of contemporary politicians.

“Bill’s actions as a community member and family patriarch made him a role model for me. It was through him and his wife Joyce that I experienced Gambier so fully. The Kleins had a community Christmas carol-singing party, picnics at the Gambier Fishing Club, and countless small dinners where diverse faculty and community members met each other. Bill introduced me to the joys and woes of being a warden of Harcourt Parish, the thrills and spills of horseback riding and jumping lessons, and the pleasure and tension of navigating a speedboat along the Maine coastline. He willingly shared much of his life with me over 50 years, and it enriched me in ways I continue to discover.”

A memorial service is scheduled for 11 a.m. on Saturday, April 30, at the Cathedral Church of St. Luke (Episcopal) in Portland.