With a charter membership of 17 students, the BSU was assigned a space on the second floor of Peirce Hall that members named the Ujima Imani Lounge. (Ujima is the Swahili word for collective work; Imani is the word for faith.) For many years, one of the most distinctive features of the lounge was a mural by Willie Leon Haslip ’74. The mural was, unfortunately, painted over, as the result of misunderstanding by a contractor during the renovation and restoration of Peirce Hall in 2008.

As part of the 45th anniversary celebration, Leon Haslip '74 returned to campus to recreate his original mural in the lounge. Students and alumni rededicated the lounge in memory of Ruben Edward Pope III ’70. Pope was a leader of Kenyon’s African-American students and a force for change, especially with regard to increased diversity within the faculty and student body. 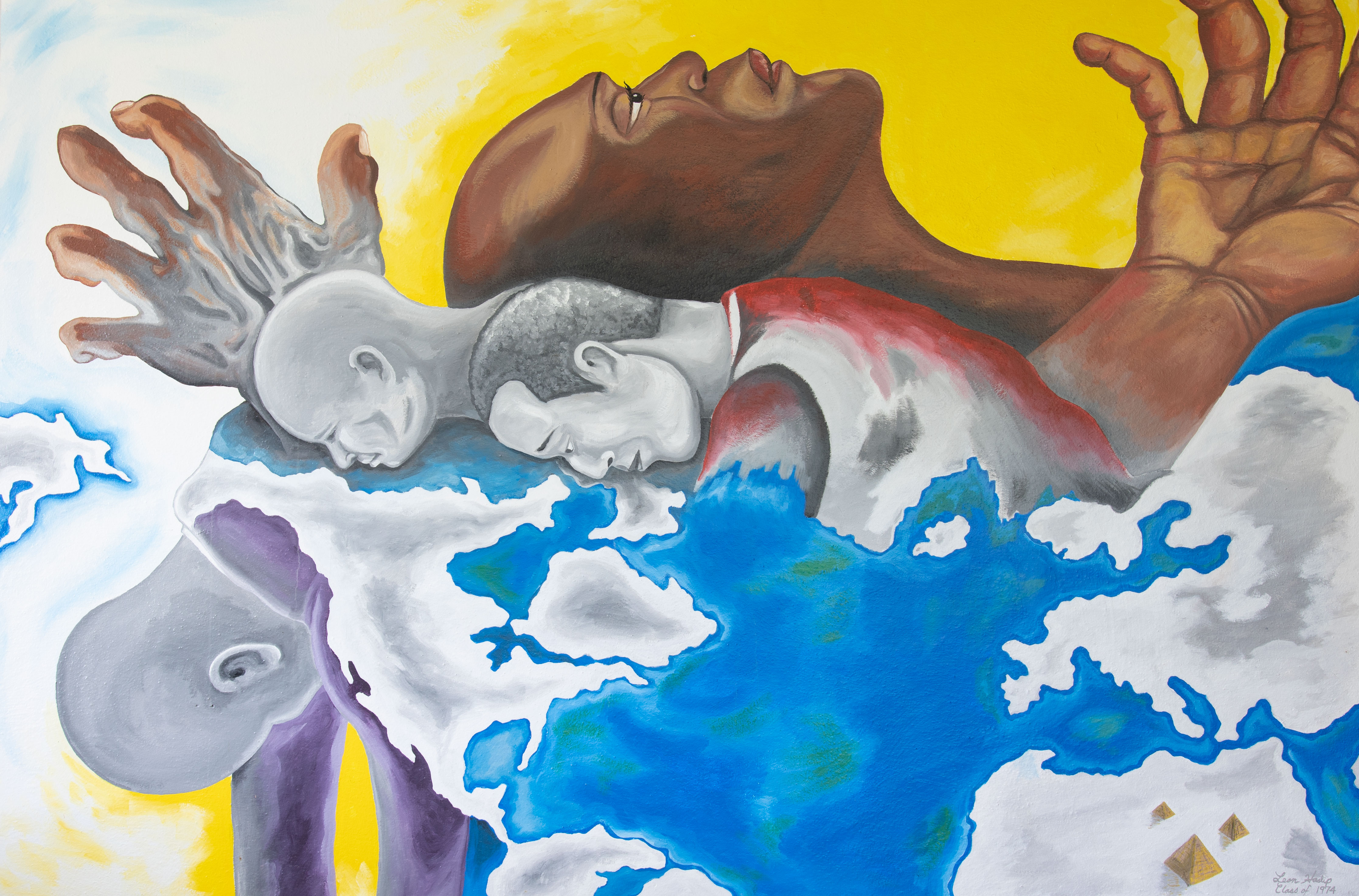 "Recently I had the unique opportunity of returning to my college stomping grounds and replacing a mural that I painted (with the help of other BSU students) some 38 years ago. To participate in recreating something that the last time I laid eyes on was so long ago was more than a challenge; but through God's grace (and the assistance of Dante DiBartolo — a very talented artist) we were able to bring something new to an old theme and stick to a deadline. This was a lot of fun, a lot of work and very rewarding as a final product. The current Black Student Union members expressed approval and excitement about what was created. Chris Kennerly, as Director of MultiCultural Affairs, facilitated the project and expressed great pleasure and appreciation for recreating such an important symbol for both the alumni and for the pride of the few Black students that continue holding up the legacy of a small room that has stood proudly in the midst of a sea of dis-concern.

It is a hope that this mural will solicit curiosity from some of those Black students who no longer want to be Black; and perhaps give them a reason to step into that small room that bound the diversity of a single race of students into a safe haven that stood to provoke the growth of all who sought refuge, solace, comradery, support, courage, pride, debate, strength or just a word from another who identified with some experience of being invisible in a whitewashed world. A world that provided an opportunity for educational advancement while subtly vying for the Spirits and consciousness of our Blackness to trade for some acceptance of being nondescript.

So, out of Africa, all life sprang, into a world turned hostile by blind exploitation. Building nations on the backs of Black, while sucking the tone from the lands we bred. Though bleak this history has weighed us down, we are not defeated by this test. From the sea we come and above the earth we walk, spreading our courage to survive over the fears of the doubters. GOD is golden in the light that rejuvenates our hopes. Rays of His spirit defining Truth and calling us to continue. Far above our past we see the future. That we divine our place as ones who loved Gods Word so much that we stayed the time of human disgrace to breathe the stars and define freedom."