With three new programs up and running, and many more on the horizon, the Office of Green Initiatives (OGI) compares this semester to an Indiana Jones-esque mission to fight the enemies of “entrenched behaviors.”

In response to the College’s 2016 Second Nature Climate Leadership Pledge Carbon Commitment, the director of OGI, Dave Heithaus ’99, and 10 student interns are implementing new programs throughout campus to make progress toward achieving carbon neutrality. Here are three steps being taken this semester:

“When we look at the ways in which we can reach carbon neutrality, first we look at reducing the amount of carbon we emit,” explained Erin Keleske ’18, an OGI intern. Part one of this strategy amped up this fall with the installation of two Tesla chargers and a universal electric-vehicle charger at the Kenyon Inn. After connecting with Jordan Rhyne ’13, the manager of the Tesla dealership in Columbus, Ohio, in late 2015, Heithaus worked with the automaker to receive the equipment as well as $4,500 for installation, leaving Kenyon to pay the remaining three to four hundred dollars. The deal was forged in an effort to encourage students, faculty and visitors to use electric vehicles and reduce fossil fuel emissions if financially able. With potential plans to expand charger installation to remote parking lots and the Kenyon Bookstore, Heithaus views this change as “the very, very first nascent steps on a journey that is inevitable.”

While Heithaus counts a few students and faculty members with electric vehicles, he firmly believes that once the infrastructure is in place, members of the College’s community will take note. “I think it really is a case of ‘if you build it, they will come.’”

Step two of achieving carbon neutrality, said Heithaus, rests in solid waste. After several successful years of working with Peirce Dining Hall to compost food scraps, OGI recently turned toward another source of food waste: student apartments. New compost bins, which feature a spray-painted apple core insignia, greeted each apartment resident when they arrived back on campus this fall. Every weekend, Keleske and the nine other student interns take turns collecting this compost and delivering it to the Kenyon Farm, where it will become a source of nutrient-rich soil. Keleske cites positive reviews for this program thus far and believes this small action can help students prepare for a lifetime of green living. “Compost … reminds those who choose to use it that environmentalism doesn’t have to be this scary, life-altering change. Small changes add up.”

Finally, OGI unveiled a partnership this semester that aims to address a third part of the College’s carbon neutrality game plan: carbon offsets and sequestration. From even before first-year students and Orientation Leaders arrived on campus, the OGI student interns started advertising for a new app called “UCapture.” The app and browser plug-in allow students and faculty to gift carbon offsets to Kenyon-related projects every time they buy items online from more than 2,000 sites, including The New York Times and Walmart. If the College and peer institutions successfully utilize the program, Heithaus explained, half the money will go toward building the UCapture business, and half will be used for investments in projects like reforestation or methane capture within 100 miles of Kenyon. The program takes online shopping, a common phenomenon on a rural campus, and creates opportunities to make carbon-neutral transactions that help offset emissions such as study-abroad travel. Keleske reminds students that it’s “non-invasive and doesn’t try to convince you to spend extra. It just takes advantage of our current system to do some good.”

Each of these programs speaks to the College’s efforts to become a hotspot of responsible global engagement. They work as introductions to OGI’s next big projects: the Green Revolving Fund, a funding mechanism dedicated to energy efficient initiatives, and a mini-grant program for student-faculty teams looking to work on independent sustainability projects. All this will be factored into the College’s official carbon neutrality action plan, which will be released by February 2018.

A universal electric-vehicle charger installed in the parking lot of the Kenyon Inn. (Photo by Emma Raible '20) 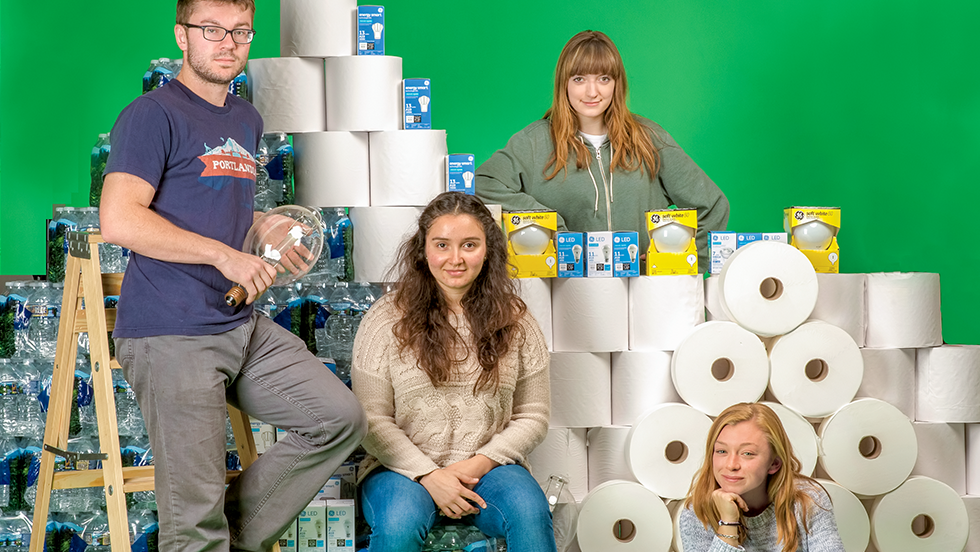 A student-driven initiative aims for campus carbon neutrality within decades.

Read more in the Alumni Bulletin.
Join our path forward.
Give To Kenyon
Loading